Stefanie Dimitrovas has studied environmental science, dance, and visual arts. She has trained her body with the Axis Syllabus research community and Penny On The Tracks Circus classes, her eye in Concordia’s Studio Arts program, and her green thumb at the Concordia Greenhouse and with the Montreal Permaculture Guild (MPG). She sings out of passion and habit, and found her Fruiting Bodies collaborators through Meghan’s experimental choir and the musically-inclined round-singers of the MPG. She currently delights in contact improvisation, nature connection mentoring,  and experimental / world vocal music.

Eleuthera Diconca-Lippert is a Montreal-based vocalist with experience in a wide variety of styles from Spanish folk, to heavily-improvised funk and soul covers. She has audited vocal improvisation workshops at Carnegie Hall with Bobby McFerrin and Zakir Hussain. Since 2009 she has been leading women’s singing circles, studying Sound Healing and co-creating Japanese performance pieces, the videos of which were just released summer of 2015. She is currently working on her first full-length solo album of soul/blues originals, to be released August 2016. To have a listen, check our her solo site here. 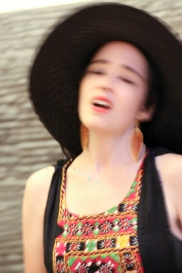 Meghan Riley is a Montréal-based vocalist and composer who has performed in numerous projects since 2004. As a member of the Montréal vocal trio Fruiting Bodies, she’s released a full-length album, Fascia and toured extensively throughout Canada and the United States. Entering the world of trip-hop, electro-pop and techno, Meghan has collaborated, composed and recorded vocals with various producers: Spooloops,Karl Snyder, Us Kind Animals, Hissy Fit in their electro-pop duo Magmatic and Kazuto Okawa in his project LLLL. Meghan’s exploration of ambient music includes her project Hunger Moon with James Dunkel and WEAVE, Meghan’s solo project of ambient vocal loops. With this project she performs regularly in Montréal at yoga and dance classes, puppet shows and drone sleepovers. Since 2007, Meghan has facilitated Experimental Choir, creating a curriculum to teach vocal development, body awareness and improvisation. Meghan’s current focus is music video production to explore the synesthetic connection between visual art and sound and to bring visibility to her music.

Fruiting Bodies is currently collaborating closely with harpist Coralie Gauthier, who plays on the album Fascia. Coralie is a classically trained harpist with diverse experience, playing styles such as celtic, classical, modern and international as well as ambient and relaxation music. She spent 6 years at the Montreal Conservatory, and has since acquired an electro-acoustic celtic harp with which she has participated in numerous projects and collaborations with artists such as DJ Elios and breton storyteller Olwen Chorlay. In 2014, she brought her harp to over 7 Asian countries working as a traveling musician. Fascinated by music’s healing and soothing properties, she is currently studying online at Harp For Healing of the Clinical Musician Certification Program, exploring the therapeutic side of the harp by playing in yoga centers and for massage sessions. Now a member of the Montreal Metro Musician’s Association, she can also be heard in street performances, in cafés, as well as various events around Montreal.